Hand size is one of the hottest topics in regards to Quarterback recruitment both at the NCAA & NFL levels.

The game of football has evolved tremendously the past 10 years, with more and more 5'10-6'1 quarterbacks playing D1 / NFL football; who have both the ability to pass the football as well as move the chains running the ball.

This video below demonstrates how ANY Quarterback or catching athlete can send their "verified" hand size to any NFL / CFL or Division 1 coach or scouting dept.

Here is an instructional video we made at ODU

Want to make sure an NFL / CFL or D1 team knows your true hand size? Here is a simple video on how to clearly measure your hand size - and show the verified results to that organization or coach.  Make sure to keep the video rolling with zero breaks, and focus clearly at the end on the 'dot' measurements next to your ruler.  End the video with a still picture that clearly shows the two "marked dots" with the ruler clearly showing the measurement.  As hand size is becoming more of an evaluation process for QB / WR's – make sure to add this verified video to your HUDL or recruiting page.

That was the Green Bay Packers quarterback's answer for how he managed to hold on to the football at a crucial point in the NFC divisional playoff game Sunday, when Dallas Cowboys safety Jeff Heath drilled him from behind for a jarring, 10-yard sack. 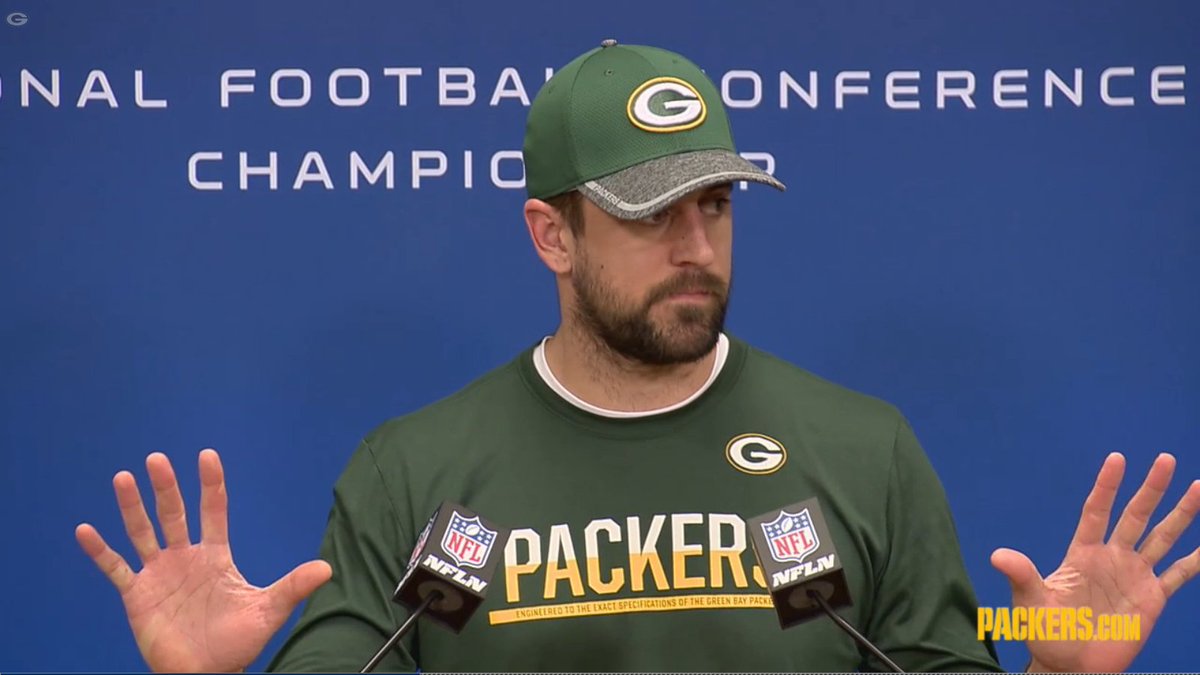 Aaron Rodgers' reaction when asked how he held on to the football when Cowboys S Jeff Heath drilled him from behind on Sunday.

Rodgers then nodded his head affirmatively and said: "Size matters."

Rodgers never mentioned his actual hand size, but they were measured at 10⅛ inches at the 2005 NFL combine before he was drafted. Anything over 9½ inches is considered above average for a quarterback. Rodgers' hands measured considerably larger than the other two quarterbacks -- Alex Smith (9⅜ inches) and Jason Campbell (9⅛ inches) -- drafted in the first round that year.

A lot has been made of quarterback hand size recently. You should ignore it. Here's why.

This article by @notthatnoise with references from PRO FOOTBALL REFERENCE does a great job showing if in fact, and what correlation can be made of hand size, if any, at the NFL level.

Much was made last Feb/March regarding Jared Goff's hand size, as he would eventually become the number 1 overall pick in the 2016 NFL Draft.  Article

Hand size data was not kept before 2008 so details are scant on the hand size of some of the NFL's more veteran signal callers. But since 2008, few starting-caliber quarterbacks have checked in at or below nine inches. In the AFC North, both Joe Flacco (9 5/8) and Andy Dalton (9 1/2) both measure well above Goff, while Ben Roethlisberger's hand size is unknown, though it is assumed to be large given his stature.

According to a chart compiled on Quora, dating back to 2008, Ryan Tannehill is the only quarterback to have his hands measure at nine inches or less and get considerable time as a starter. Case Keenum and Colin Kaepernick both measured at 9.125 inches, Dalton, Robert Griffin III, Matt Ryan and Sam Bradford all checked in at 9.5, which is near average. The above average group includes some of the best young quarterback in the league, including Cam Newton, Brock Osweiler and Kirk Cousins, who each measured at 9.875. Several others including Andrew Luck (10 inches), Matthew Stafford (10), Tyrod Taylor (10) and Russell Wilson (10.275) were all well above average.

"[It's] huge. You better have big hands. Russell Wilson's 5-10 ½, but he's got 10 ¼ hands. You better have a big paw to manipulate the football," 49ers coach Chip Kelly said. [But] they're guidelines. It's not like ‘He had nine-inch hands, he's out.' If you just look at it from a pure analytical standpoint, the guys who are more successful at the quarterback position have had bigger hands. Has there been someone who had had size-9 hands that has been successful? Yeah. That's true."

Indeed, there are also successful quarterbacks with small hands. Michael Vick had historically 8.5 inch hands and Aaron Rodgers, arguably the best quarterback in the league today, had his hands measured at 9.38 inches, a below average number. Then there is Cowboys quarterback Tony Romo. The 2004 undrafted free agent has built a very successful career despite hands even smaller than Goff's, at 8.86 inches. So as long as he has the other skills necessary to be successful at the quarterback position, Goff should be fine with nine-inch hands. Perhaps just don't let him hold the ball on field goals.